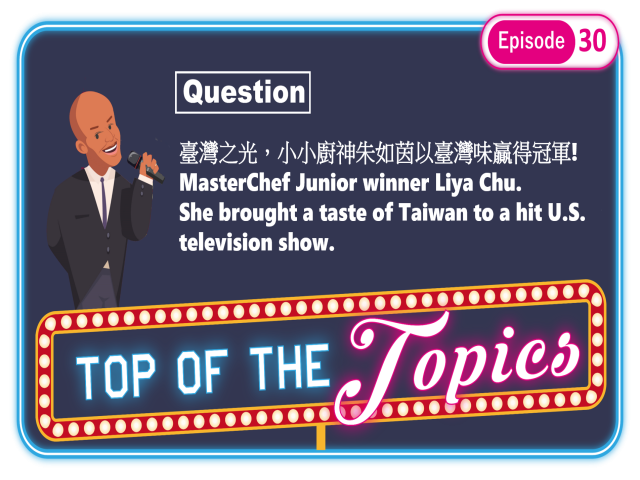 Announcer: You’re listening to: Top of the Topics!

Chuck: Hello and welcome to another episode of Top of the Topics! The show where if you don’t know the news …

Chuck: Where’s Willy?! You with us?

Willy: All the way, Chuck!

Chuck: And Eve, eager to excel?!

Chuck: Let’s cook up a storm! Willy, Eve, I’ll give you a word, you give us a definition. First correct answer wins. Fingers on buzzers. Ready? … Word one: ‘MasterChef’ Eve.

Eve: This one’s easy Chuck! It’s a TV show, they compete to find the best cook. Or, the ‘master chef’

Willy: When something’s ‘tantalizing’, it’s really tempting. It means it looks and smells and sounds so good you’ve just gotta have it!

Chuck: Correct! One point each … Sally?

Sally: Both Liya’s parents are from Taiwan. They taught her how to cook their most tantalizing dishes in their restaurant in New York, which helped her to win! She was also inspired from a young age by Michelin-starred Taiwanese chef André Chiang.

Eve: They only ever give out Michelin stars to the very best restaurants and chefs in the world, it shows how great their food is!

Sally: Liya was impressive right from the start! In the very first episode she made a traditional dish of honey-glazed eel with rice noodles. Gordon Ramsay, one of the show’s judges and another Michelin-starred chef, was really impressed. He told her: “You can definitely cook Taiwanese, and it’s delicious!”

Chuck: Uh-oh! That sound means we’ve run out of time, and Eve’s our winner with 2 points!

Willy: She was so fast, I was starved for choice!

Eve: All this talk of food has made me hungry for more, Chuck!

Chuck: Leave the jokes to us, guys …